WASHINGTON, D.C. — Today Judicial Crisis Network (JCN) launched a new ad called “Stop the Bigotry” as part of its $3 million-dollar ad campaign this week.  This is JCN’s third ad as part of an all-out effort to confirm Judge Amy Coney Barrett to the Supreme Court.  JCN expects to spend at least $10 million on the effort.

“Stop the Bigotry” will begin airing today in Iowa, Colorado, and Washington D.C.

JCN’s first two ads—“Follow Precedent” and “From Her”— appeared on TV and digital, and aired nationally on cable and in key states including Colorado, Iowa, Maine, North Carolina, Utah, and Washington D.C.

“Democrats and their allies are already launching vicious attacks against Judge Barrett’s faith and family, picking up where Senators Feinstein and Durbin left off.  This anti-religious bigotry is shameless, and an attack on every person of faith willing to serve in public office. Stop the bigotry.” 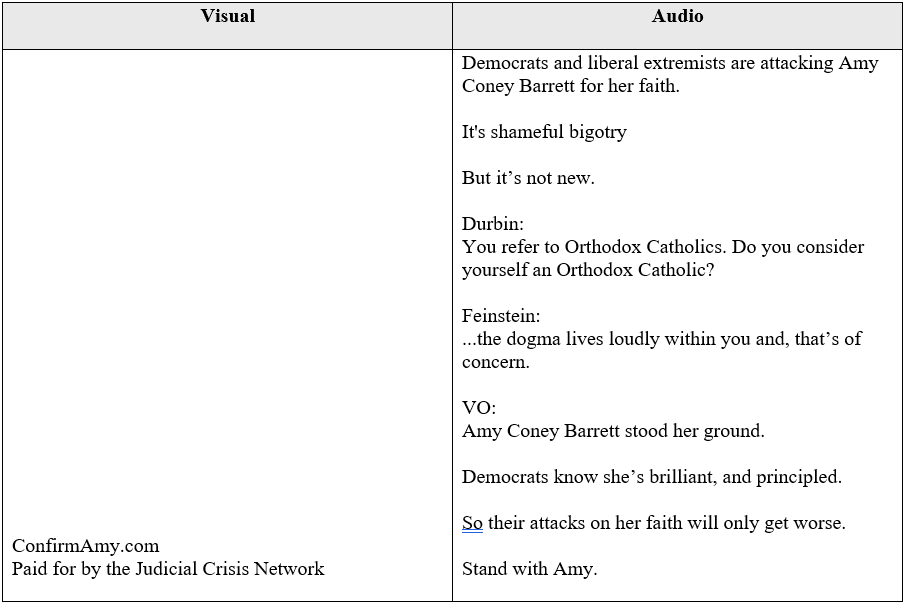 www.ConfirmAmy.com
© 2020 JCN. All rights reserved.  A project of the Judicial Crisis Network